The digital asset of XRP has had an amazing run in the markets between the months of January and April this year. The remittance coin of XRP opened the year at a value of $0.21 as a result of the impact of December 2020 news of the SEC suing Ripple for carrying out an unregistered securities offering.

XRP is currently trading at $0.8464 and the team at Crypterium research has forecasted that the remittance coin could retest $0.65 if the $0.80 support is not maintained. They explained:

XRP price continues to fall and is down 5.2% this week. A descending triangle pattern has formed on the chart. The immediate major support is around the $0.80 mark. This is where buyers provide strong support.

However, so far, we do not see any positive moments for the growth of the price of this asset. Therefore, the expectation is a decline to the target level with a possible breakdown of up to $0.65.

As with most digital assets in the crypto market right now, XRP is currently depending on the 200-day moving average as its final line of defense from a bear market.

The crucial MA is providing support at the $0.72 price area as seen in the following XRP/USDT chart. The descending triangle mentioned by the team at Crypterium research has also been highlighted below. 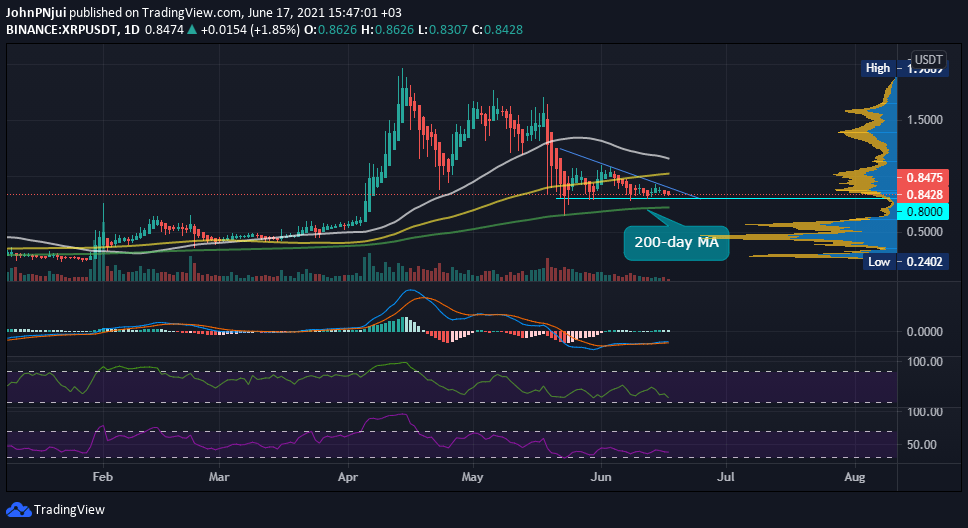 In addition, it can be observed that XRP’s trade volume has been on the decline since mid-May. The daily MACD, MFI and RSI all point towards a weakening structure by XRP that could lead to a retest of the aforementioned 200-day moving average.

Walmart Forays Into The Metaverse, Launches Two Immersive Experiences In Partnership With Roblox

Is it Bitcoin’s time to shine? British pound drops to all-time low against the dollar