Ripple has released its first quarterly XRP market report for 2021 in which they point out that Q1 was a strong one for XRP in terms of accumulation and on-chain metrics.

XRP Whales Have Been Busy Accumulating in Q1

The increment of XRP whales during the first quarter of 2021 can be visualized through the following chart from the report.

During the same time period, the transactional activity on the XRP ledger also grew significantly. According to the quarterly report, XRP ledger payment volume hit a total of $62.3 billion. This amount was a 23% increment from the previous quarter.

Additionally, the amount of unique XRP ledger addresses grew from 2.35 million to 2.7 million which is a 15% increment quarter to quarter.

With respect to price, XRP is currently trading at $1.64 with the $1.50 price area providing considerable support into the weekend. On a macro-level, XRP’s bullish momentum could be coming to an end as seen through the following weekly chart. 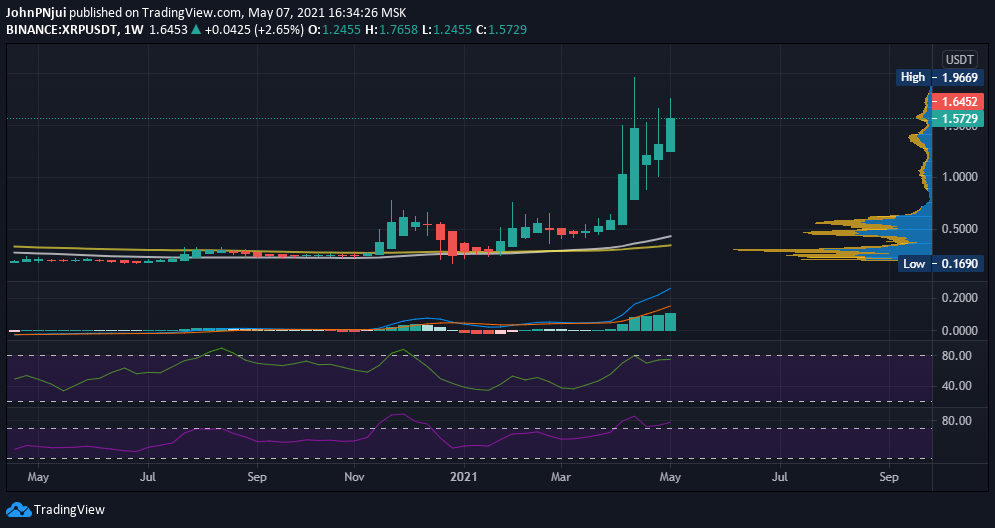 However, altcoins are currently enjoying a period of gains as the Bitcoin dominance has dropped below 50% and for the first time since December 2017. Therefore, alt season is in full swing and XRP might have enough fuel to propel it towards the $2 for a potential double top or even higher.

As with all analyses of altcoins such as XRP, traders and investors are advised to have an eye out for any sudden movement by Bitcoin – up or down – that might increase its dominance thus ruining alt-season.