The cryptocurrency market continues its rough period. It has declined in value by nearly 50% since May 12, when

Other indicators suggest that bitcoin is going to be the strongest crypto during the current slump. Its share of the market’s overall cap has risen from 39% on May 19 to 46.8% today. It’s likely to increase further as traders exit smaller altcoins and flock to BTC for (relative) safety.

Recent research from Pantera Capital also suggests that bitcoin’s current price offers a considerable discount on what it’s ‘really’ worth. It found that bitcoin was trading at 36% below the price indicated by its 11-year trend. That was on June 14, when you’d need to spend around $40,000 to buy a single bitcoin. Now, at just under under $32,000, it’s trading at nearly 49% below its 11-trend price. In other words, history suggests it’s a steal.

At the same time, data from analytics firm glassnode indicates that we may only be mid-cycle during an ongoing bull market.

As the chart above suggests, the current market may have seen only the first of three peaks. That would mean we have two larger peaks to come, in which bitcoin’s price would surpass its current ATH of $64,804. This is supported by on-chain data, which had been indicating that long-term holders have been increasingly accumulating bitcoin.

More #Bitcoin supply moving from the impatient to the patient.https://t.co/VgAybQCl0N pic.twitter.com/wc4Gg79aAZ 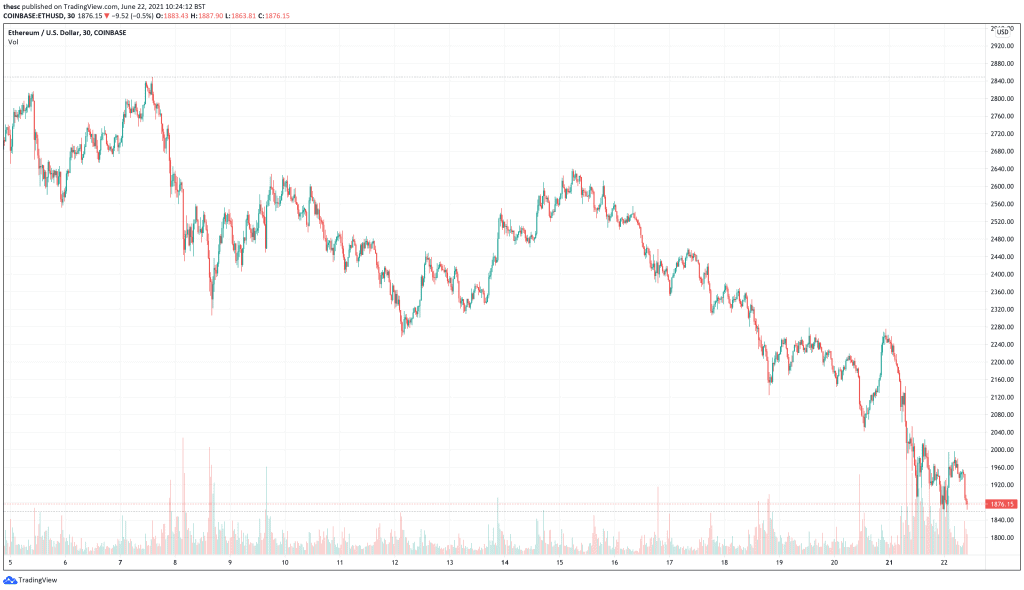 However, this steep recent decline arguably provides a good opportunity for ethereum to rebound strongly. Its fundamentals remain as strong as ever, with the approach of Ethereum 2.0 providing plenty of reason to be bullish about the cryptocurrency.

The new version of Ethereum will see it move to a proof-of-stake consensus mechanism. This means validators will have to stake — and lock up — ETH in order to verify transactions. This will take a considerable amount of ETH out of circulation, with 5.7 million ETH currently locked up in Ethereum 2.0’s smart contract. This is up from 2.2 million on January 1, and indicates just how much could be staked when Ethereum 2.0 finally launches.

Assuming that holders stake a considerable portion of the total ETH supply, its price could rise substantially. This is why it’s one of the likeliest cryptocurrencies to explode after this crash.

Polygon (MATIC) is another cryptocurrency that should be watched as the market recovers. At $1.09, it’s up by nearly 5,000% over the past year, although it has sunk by 15% in the last 24 hours and 29% over the past week. 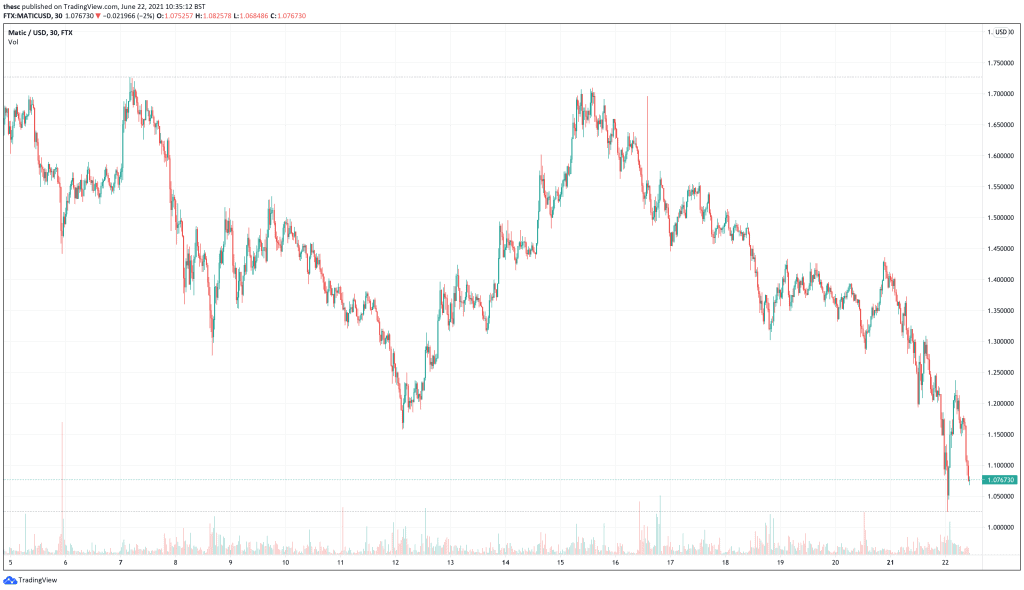 Despite the fact it hasn’t escaped the market-wide slump, there’s plenty of reason to be optimistic about MATIC. As a second-layer platform for Ethereum and Ethereum-compatible apps, it has enjoyed healthy adoption in recent weeks. Its total valued locked in has risen from $1 billion in mid-April to $8.9 billion today, having hit a peak of $11.8 billion on June 15. This highlights how quickly it’s growing. It also highlights why it’s one of the likeliest cryptocurrencies to explode in the future.

Kusama (KSM) has been gradually attracting more attention over the past few weeks, and with good reason. It’s a sandbox platform designed to test Polkadot functions, features and apps before they’re officially launched. Yet the fact that it’s more ‘experimental’ makes it easier — and faster — to use and upgrade, so it has been attracting adoption in its own right.

Accordingly, its KSM token is up by 3,500% in the past 12 months, at $204. Of course, with the ongoing market slump, KSM is down 22% in the past day and a hefty 52% in the past week. However, given the growth of the platform, these falls arguably provide a nice discount on what is a valuable cryptocurrency. 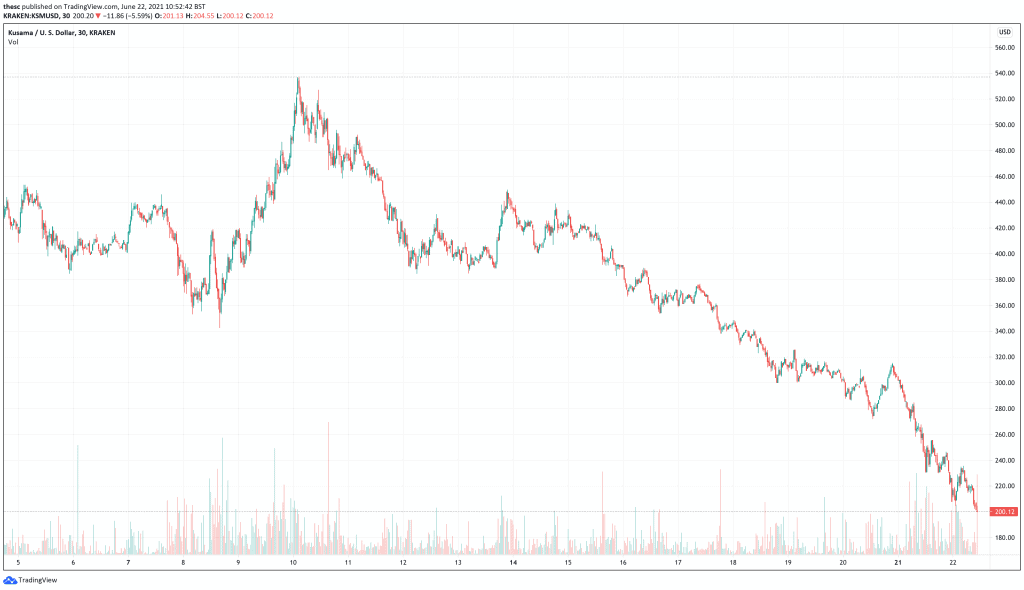 The first ever Kusama crowdloan parachain auction is set to end tomorrow at 5am EDT (11am CEST). For those who don’t know, parachains are essentially sidechains that platforms or apps can use to join the Kusama network. They’re connected to Kusama’s relay chain, which links each parachain into a single network and finalises transactions. Companies and other organizations bid for parachains, since there are only 100 parachain slots available.

As part of the first ever crowdloan parachain auction on Kusama, DeFi platform Karura has raised the most KSM: 501,000 KSM. This means it will likely win the parachain slot when the auction ends tomorrow. Not only will this event potentially generate short-term interest in Kusama and KSM, but it indicates the wider demand for space on the Kusama network. 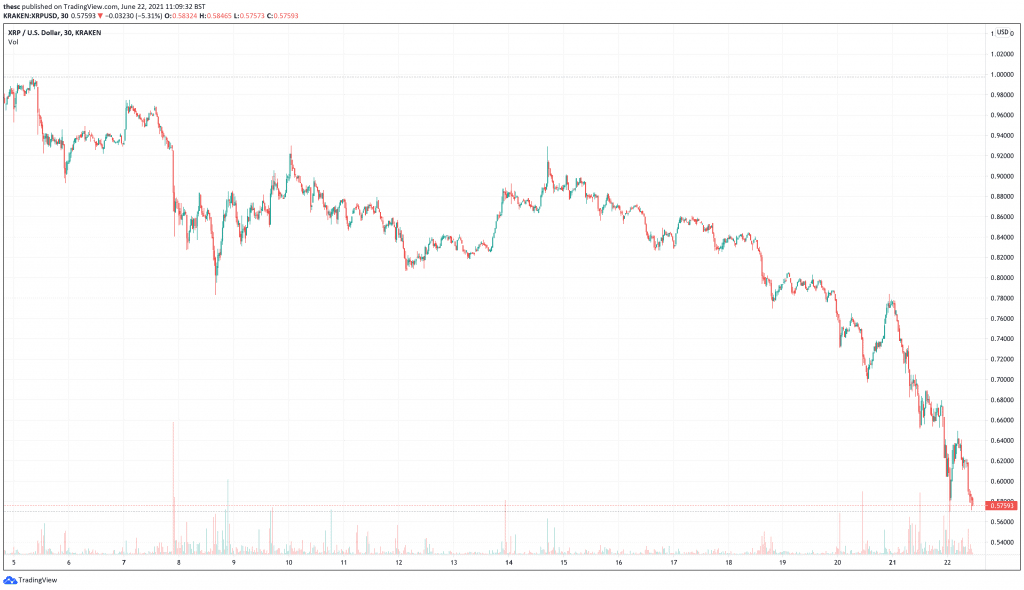 XRP’s performance over the past few days and weeks is obviously disappointing. However, it’s one of the few cryptocurrencies likely to enjoy some good news in the coming months. Its ongoing legal tussle with the SEC is increasingly moving in its favour, with legal opinion suggesting that the SEC’s case is fairly weak.

@Ripple case, the SEC does not seek a preliminary injunction to stop current sales of #XRP by Ripple.

Because it can’t make a “substantial” showing of a likelihood of success as to a “current” violation.

The mere filing of the Complaint was the weapon!

On April 6, a judge presiding over the case granted Ripple access to internal SEC discussions regarding the status of Bitcoin and Ethereum. Commentators regarded this as a significant step for Ripple, whose CEO Brad Garlinghouse has said he feels “really good” about the case.

Lawyer Jeremy Hogan has said recently that he expects the case to near a conclusion around the end of 2021 or the beginning of 2022. Of course, if Ripple and the SEC settle before then, this could provide XRP with a boost sooner.

Looking to buy or trade Crypto now? Invest at eToro!